The moon.  Humans have been hunting for the power of the moon for as long as mankind existed.  Perhaps it's the unattainable that drives us to bay at certain times of the month, or perhaps it's the pureness of its beauty on any given night that begs us to look up and see its shape.  The moon protects us, haunts us, inspires us and enlightens us.  No wonder one of the most famous songs of the world is centered around the moon:  That's Amore.  I remember the scene from Moonstruck when Cher's character finally gets that she's truly in love with Nicolas Cage's character.  Was the moon to blame?  I had my own pizza pie moment this summer.  Only this time I fell in love with Dolce and Gabbana. 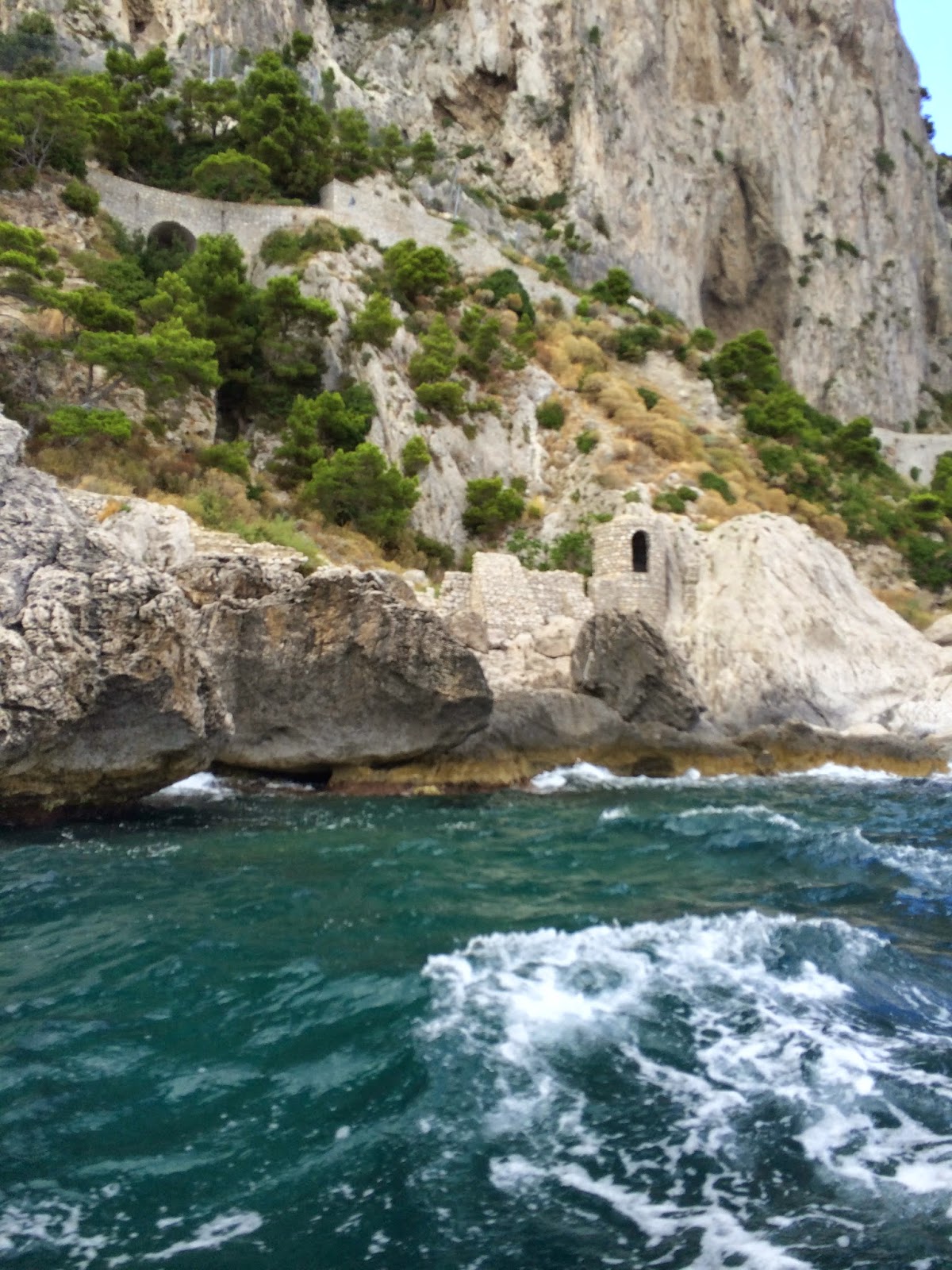 It's hard to explain how a couture fashion show looks when it takes place nestled in the rocks of the famous La Fontelina beach club overlooking the water.  How there was not the usual paparazzi that swarms the event hunting for celebrity.  How being nestled in the rocks of beautiful Capri could be the place of such extreme beauty.

I sat with friends on the front row wearing a 1950s Vintage dress by Edith Small (from the most amazing LILY et Cie in Los Angeles) and flats - the dress code had been 50s60s Italian Riviera La Dolce Vita.  I objected to the idea of flats at first, but once I walked the hundreds of cobble steps down I was thankful.  Plus even Anna Wintour wore Tods loafers… Opera tenor arias started as these small boats approached the cliff very close to where we were sitting.  And then the BAREFOOT models - in glorious hand-painted gowns - one by one disembarked and walked the non-existent runway around the rocks.  It was the most stunning moment in fashion I've seen. After the gowns exited, the other models came from a more modest entrance.  But the clothes were equally as exciting and beautiful.  I don't think my jaw ever closed. 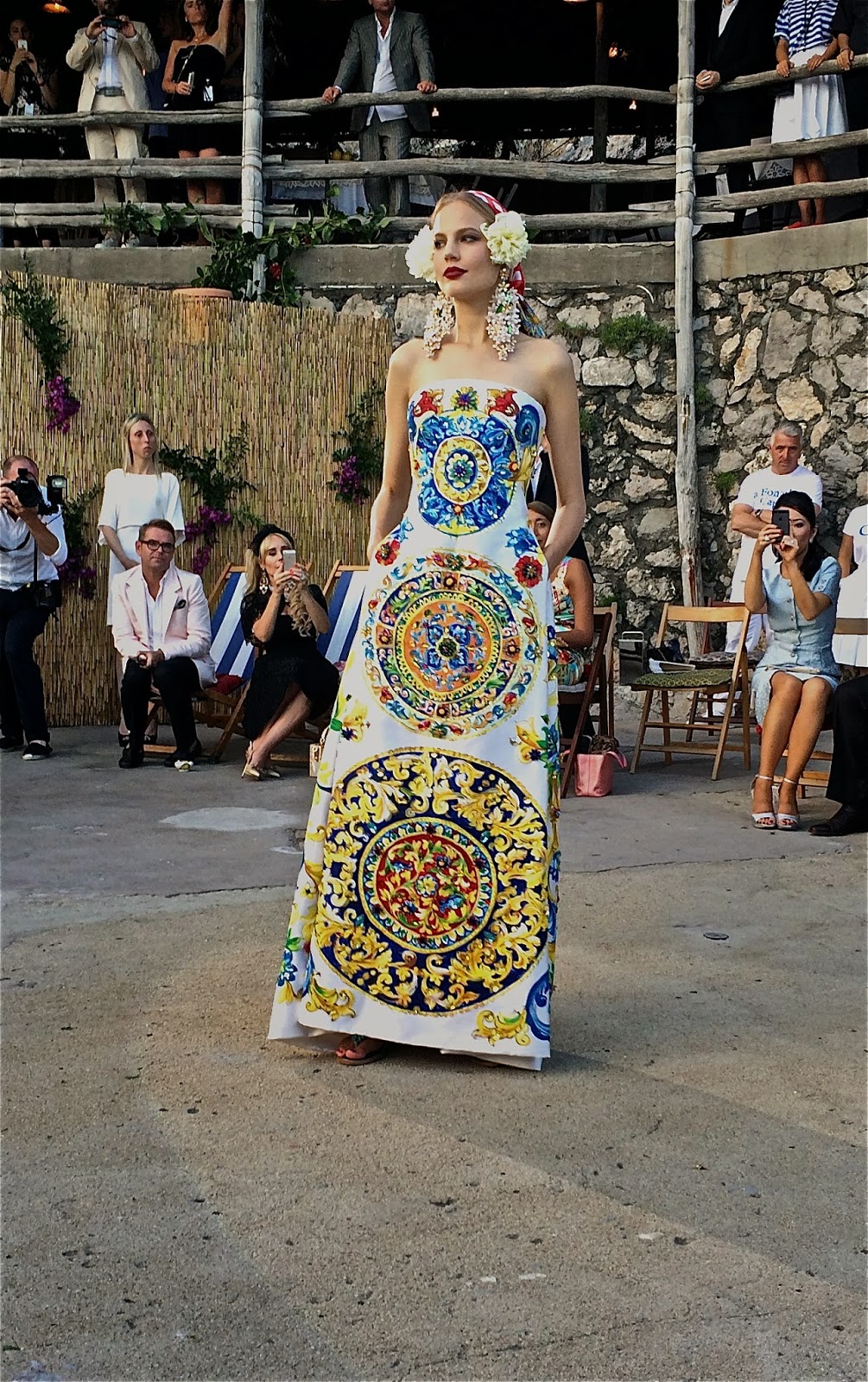 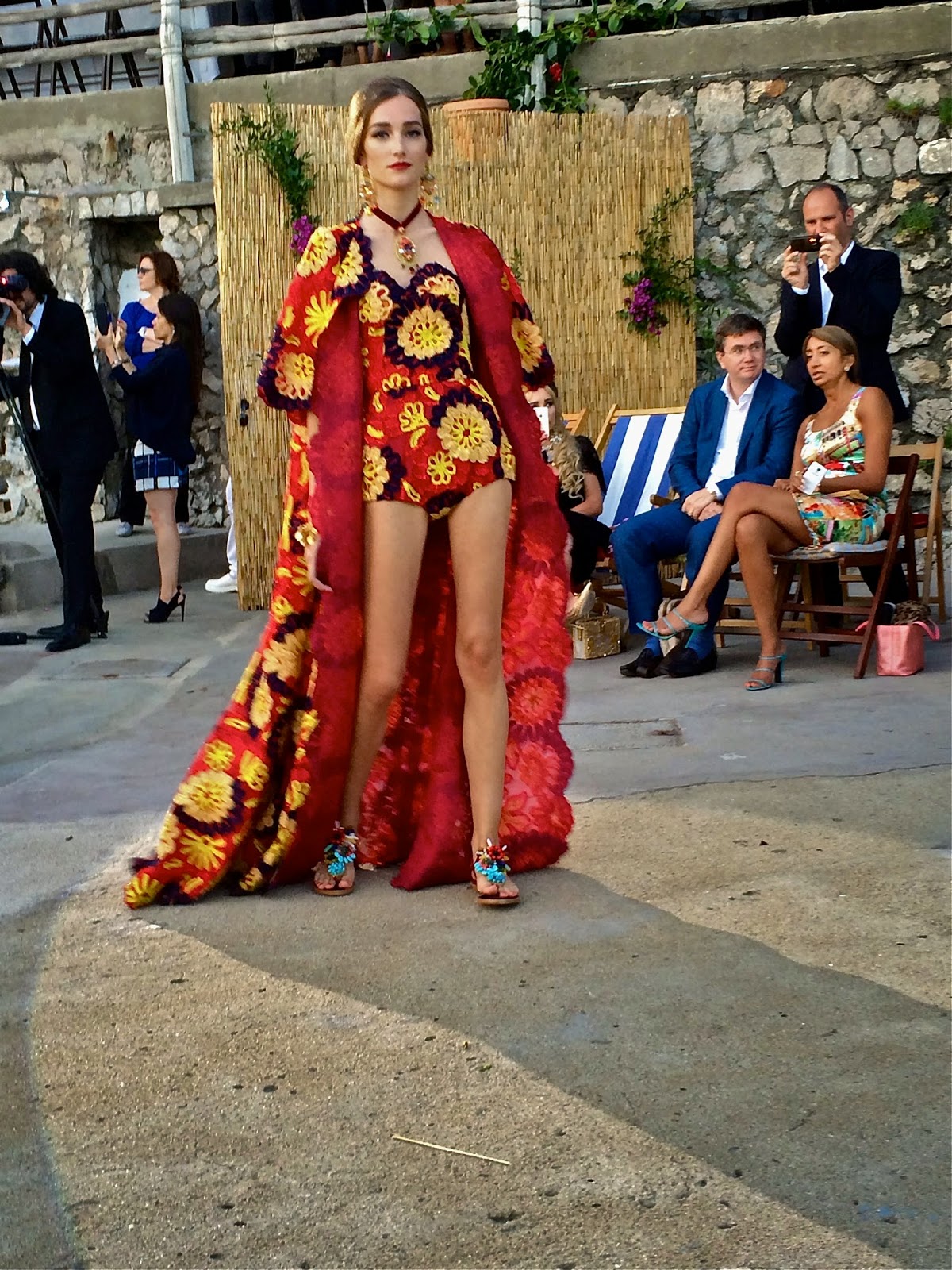 After the show we were all to be seated for dinner.  This took a bit of time as the Italians may not quite be known for their organization.  I sat with a friend on the lower level of the restaurant close to the sea.  I had no idea that I would revisit this spot several times over the next two weeks of my vacation.  Darkness set in and the moon lit up the sky.  A stupendous, bright, large full moon.  Did they plan this whole event around the timing of this spectacular moon?  I wouldn't doubt it.  More boats came in, this time lit up with fairy lights and what looked like a bridal party.  Oh yes, the Dolce and Gabbana Bride! And then the fireworks.  And the moon.  And friends.  And music. 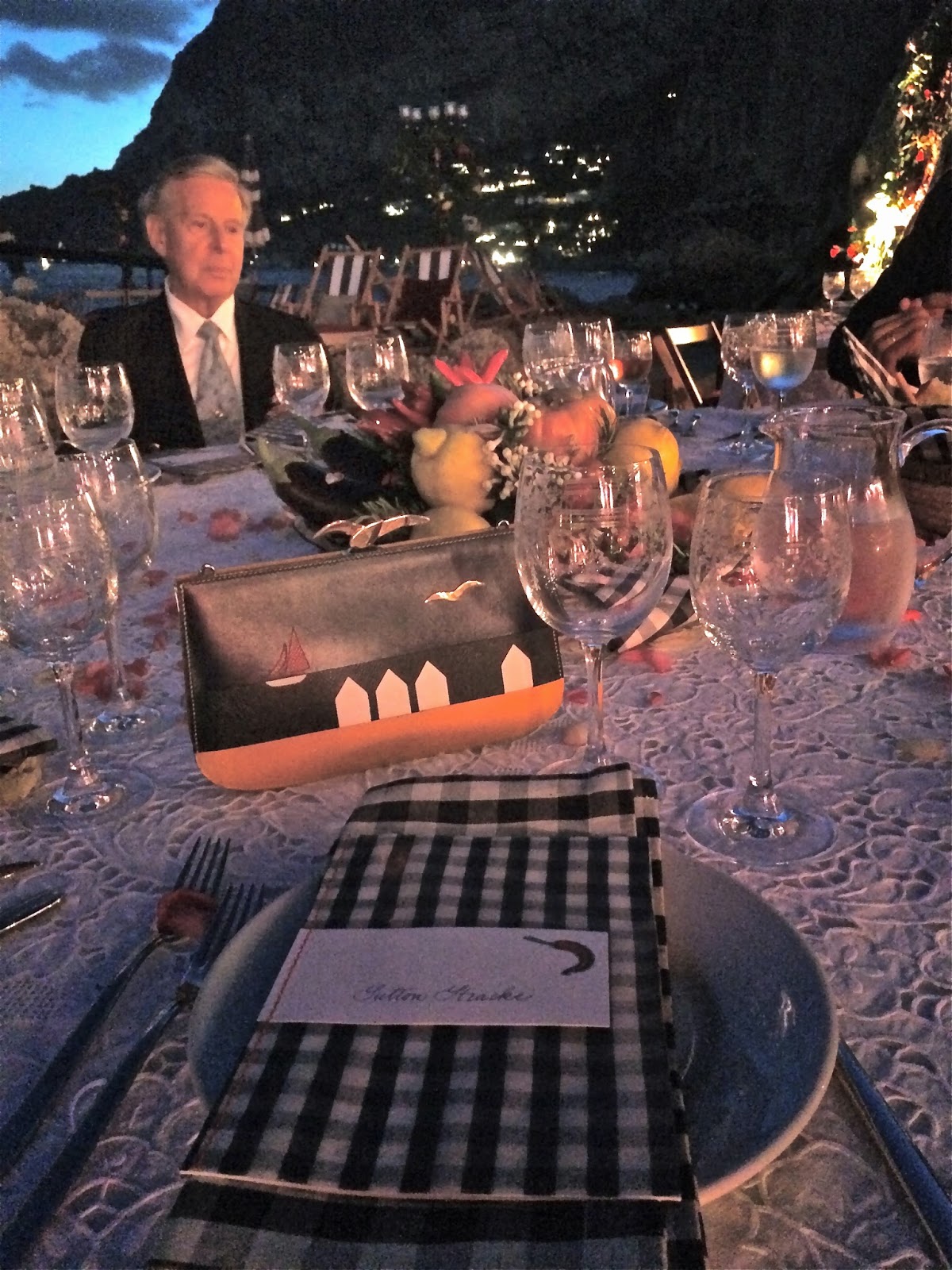 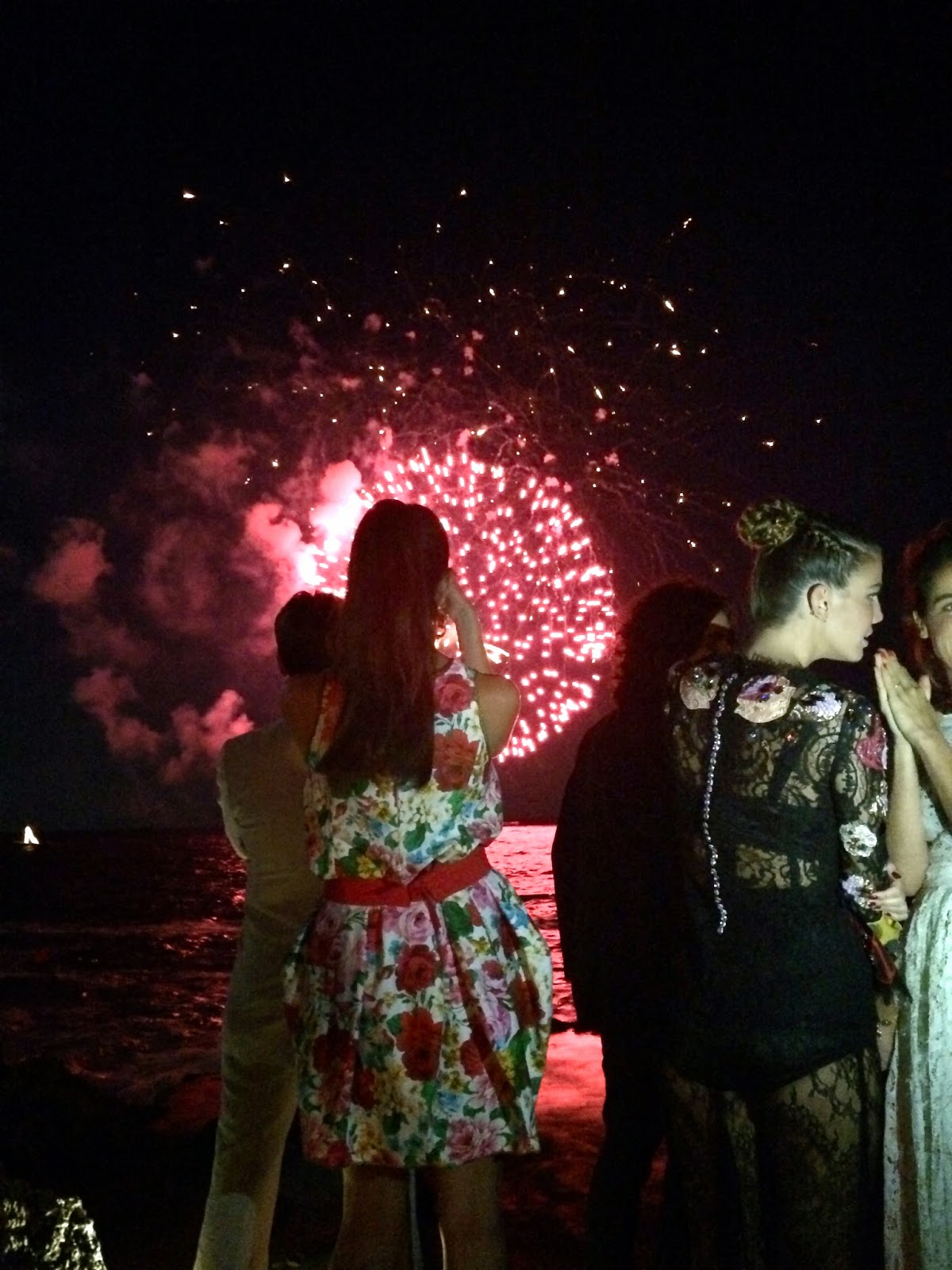 I'm not sure if the moon put a spell on me that night or not, for I have never been a huge lover of Dolce and Gabbana.  But I will tell you that I most certainly fell in love that night.  Spending time in Capri, ensconced in its smells, its colors, its food, its beaches, its people made me truly understand the vision and the passion of what Dolce and Gabbana put into this collection.  I left humming Vita Bella and having the excitement of soon taking a piece of Capri with me to Los Angeles.  That's Amore. 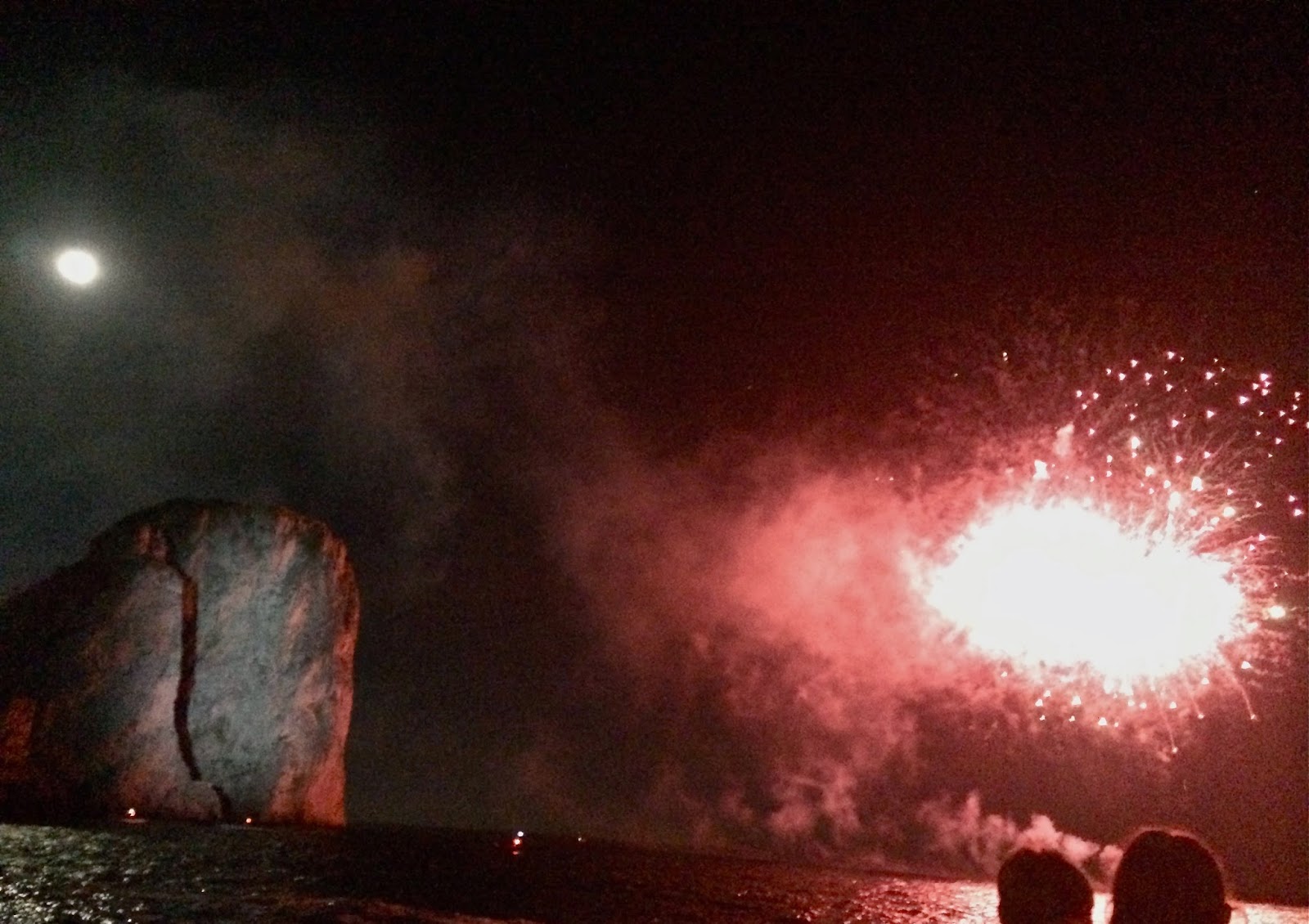 Posted by Sutton Stracke at 8:38 AM No comments: Links to this post